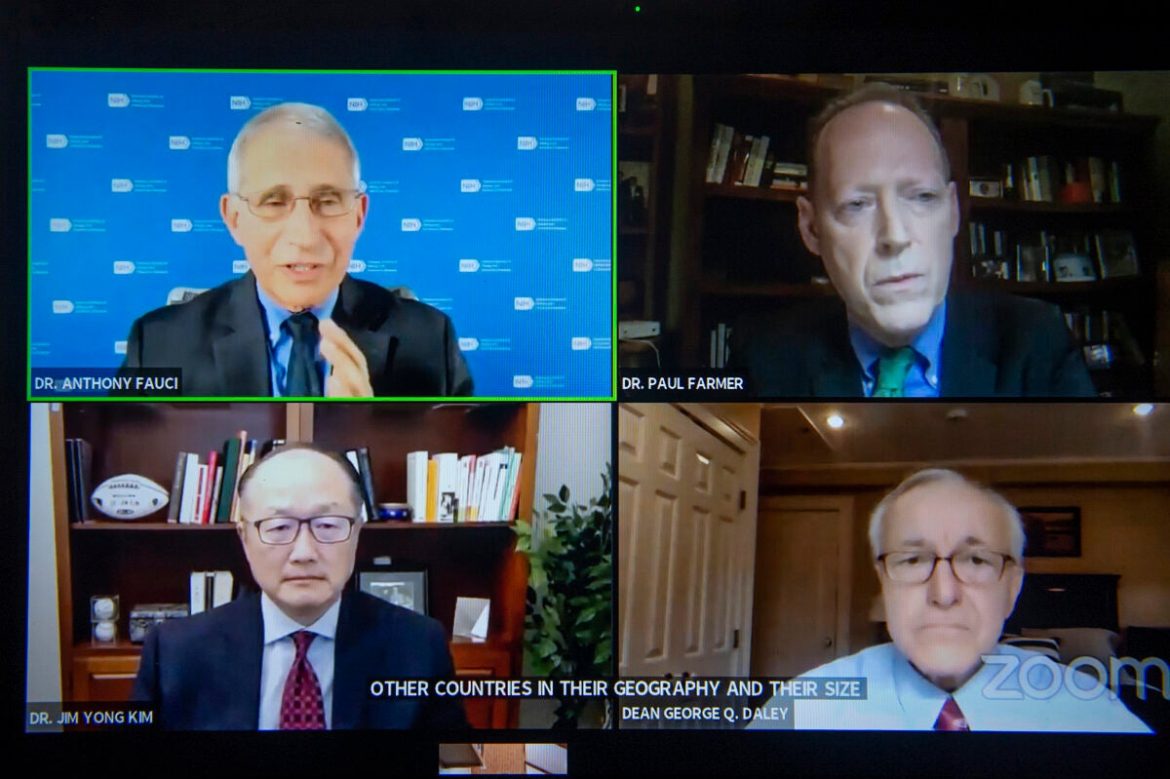 Medical experts called the idea that a coronavirus vaccine would allow life to immediately return to normal “magical thinking,” describing instead a slow process of inoculating the public during which public health measures like masking and distancing would still be needed.

Anthony Fauci, the nation’s top infectious disease expert and a leader of America’s coronavirus response, said Monday a vaccine is “just around the corner” and that it represents the clearest path toward ending the U.S. coronavirus pandemic. Even so, former Harvard Medical School professor and former World Bank President Jim Yong Kim warned against pinning hopes on it for a quick end to the pandemic.

Even if a vaccine is 75 percent effective, Kim said, skepticism about it may mean that as little as half of the population would take it. So it would fall far short of reaching “herd immunity” threshold, at which enough people are protected from infection to interrupt transmission.

“We’re not at herd immunity with that level, so you still need to chase down every single outbreak,” Kim said.

Kim, Fauci, and Paul Farmer, Harvard’s Kolokotrones University Professor of Global Health and Social Medicine, agreed that the basic public health measures that have been employed since the beginning of the pandemic will still be needed. In addition, Kim called for added investment in those measures, expressing astonishment that those steps were left out of stimulus packages that focused instead on mitigating economic harm.

“We still have not emerged from the magical thinking that says, ‘Once we get a vaccine, this is over.’”
— Jim Yong Kim, World Bank president

“Why would you send $6 trillion or $5 trillion out into the world and really put in nothing for the only thing that has actually worked to stop the virus anywhere, which is the full public health response: social distancing with masks, testing, tracing, isolation and, of course, treatment of the sick?” Kim said, adding that business leaders may still not appreciate those measures’ importance. “I don’t think they understand — these business leaders — how difficult it is, even when we get a vaccine or better therapeutics, to deal with this particular virus. That’s what worries me. We still have not emerged from the magical thinking that says, ‘Once we get a vaccine, this is over.’”

Fauci said, however, the prospect of gaining a vaccine plays a critical psychological role in the fight, even if success may not mark a clear end to the problems. Many are feeling fatigued by the months of strict daily adherence to public health measures. Having the sense that a vaccine is near, he said, may be important in encouraging people to remain vigilant.

Farmer agreed the feeling of making progress is important and that we have learned much from earlier pandemics, specifically Ebola in West Africa and the Democratic Republic of the Congo — where there was resistance to an Ebola vaccine — on how to control outbreaks and promote vaccines.

“I think what people need to understand more than they do is that the vulnerable are not just in the nursing homes.”
— Anthony Fauci

“We still know the basics of what we must do to bring this epidemic under control, and that also includes preparing people for a vaccine,” Farmer said. “I have some optimism about this. There is a lot of mistrust, a lot of miscommunication that needs to be cleared up. Some of this will last well into the coming year, but there is a good chance that we can prepare communities for — and enlist the support of communities — in rolling out this vaccine.”

Farmer, Fauci, and Kim appeared at a webcast event on Monday, “COVID-19 Reflections and Updates,” examining lessons from the pandemic so far. Organized by Harvard Medical School’s Department of Global Health and Social Medicine, the event was hosted by HMS Dean George Daley, who said that focusing on the prospect for a biomedical “silver bullet” in the form of a vaccine or therapeutic risks losing sight of the importance of social, political, public health, and other society-wide systems that have affected the course of the pandemic here.

“I fear that in our breathless race for the next biomedical silver bullet, for the curative drug, the lifesaving vaccine, we risk losing sight of the systemic forces at play … without which we cannot learn the lessons in the future that will allow us to avert another, similar, disaster,” Daley said.

Fauci was critical of recent support for the idea of attempting to reach herd immunity in the U.S. without a vaccine by allowing the virus to spread among the healthy, low-risk population while enhancing protections for those at high risk of serious illness and death. While many think the high risk population is largely elderly and living in nursing homes, experience has shown that comorbidities such as diabetes, high blood pressure, and obesity are also significant risk factors for developing serious illness and are present in many age groups.

“I think what people need to understand more than they do is that the vulnerable are not just in the nursing homes. A substantial proportion of the population falls within the risk category,” Fauci said. “How do you put a safety net around 30 percent of the population in a community?”

Panelists also discussed the nation’s withdrawal from the World Health Organization, with Fauci saying he hopes the group reforms itself in a way that makes its control more centralized. Kim, who led its HIV/AIDS division in the early 2000s, said the U.S.’ expertise and resources are critical to WHO’s efforts. He also said that, even flawed, the WHO performs a vital role in the world.

“I hope we can resolve it going forward,” Kim said. “As faulty as these institutions are, as many holes as there may be, if we got rid of them, we’d have to invent them again.”