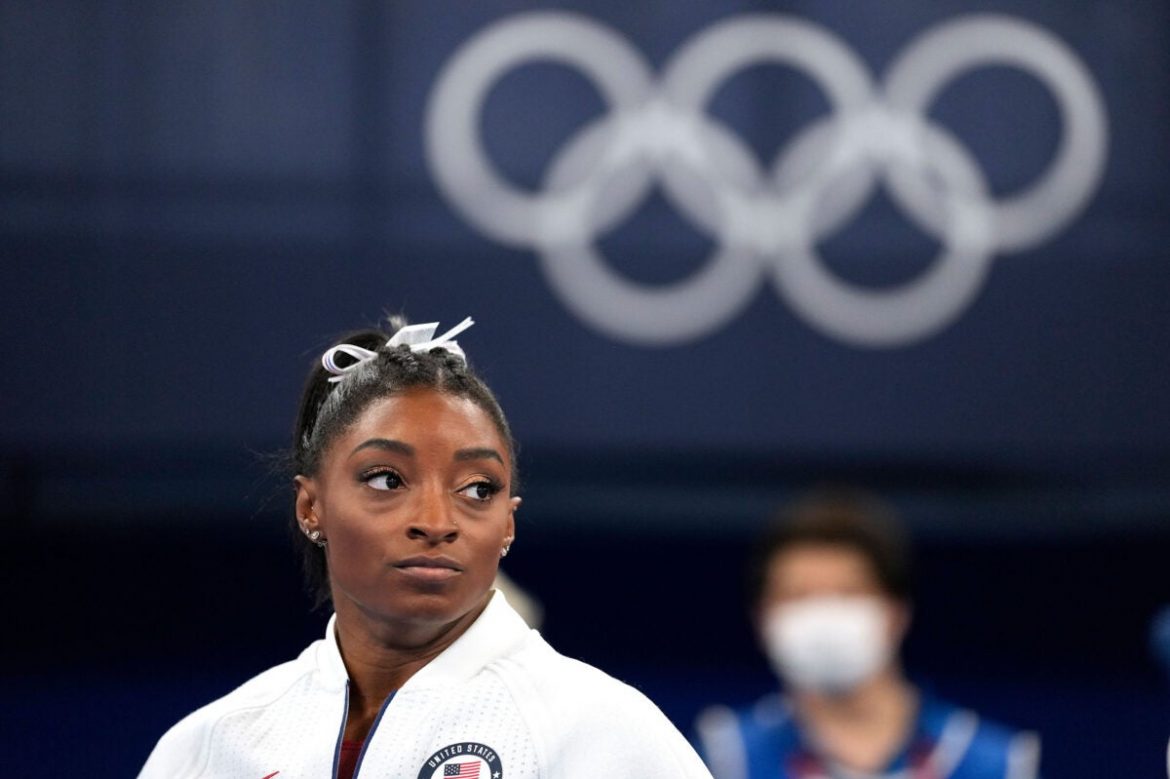 A Harvard psychologist’s perspective on Biles at the Olympics

Simone Biles was flying over a vault at the Tokyo Olympics when she felt the “twisties” — a kind of mental block that disorients gymnasts midair. The four-time American gold medalist stumbled on the landing and promptly left the floor. She soon began to withdraw from team and individual events, citing mental health concerns. “I have to focus on my mental health and not jeopardize my health and well-being,” Biles told reporters.

She is not alone.

Earlier this year, tennis star Naomi Osaka withdrew from the French Open and Wimbledon, citing her struggles with anxiety and depression. Both athletes have been widely praised for speaking up about their efforts to cope with the pressures that come with high-level competition and for foregrounding an issue many have suffered with in silence. The Gazette spoke with Harvard psychologist Michael R. Hollander about the toll anxiety can take on athletic performance and what must change to ensure athletes get the support they need.

GAZETTE: As a psychologist who has worked with high-level athletes, what is your response to Biles’ decision to withdraw from some Olympic events?

HOLLANDER: I think she did absolutely the right thing. These athletes are under so much stress. And while it’s true professional athletes and amateur athletes at this level are always under a lot of stress, the amount of stress and how pervasive it is at an event like the Olympics are just incomparable, and there is really no place they can go to get out of the limelight. You show a picture of Simone Biles in the supermarket and everybody’s going to know who she is. The expectations for her are beyond what we would really reasonably expect for a human being. So, while I appreciate some of the people who’ve been saying stress has always been part of the competition, and I think that’s true, I also think that’s incomplete. It doesn’t really account for the changing nature of social media. She could be on Facebook, Instagram, TikTok, all in the same hour. That makes it very difficult for someone like her to say: “I’m just going to do the best I can and I’m not going to worry about all the people who are watching me.” We also have to remember that this is a young person.

GAZETTE: For younger athletes in particular, what responsibility should fall on the shoulders of adults who are, in many cases, driving and pushing children to succeed?

HOLLANDER: You could write a few books on this, but my sense is that sometimes when it goes sour, it’s because the adults around these athletes have forgotten that this is a form of play. I love sports, and I am 73. I still play tennis. I box. I’m doing CrossFit. I really do try to stay in shape, but it’s fun. It’s serious fun. I take what I do seriously, but in my mind, it’s recreation. Somewhere along the line that gets lost, and it becomes more life and death. And I think that happens especially in the Olympic sports. As an Olympian, it’s not like you’re going to have a season. It’s once every four years and you’re training for a couple of hours in your life. And I think that adults need to be providing kids more contextual information about that. As in, “Put your heart and soul into this, and remember, this isn’t your career, this isn’t even your education.” These young athletes are not getting enough support from adults, coaches, and parents around keeping perspective about what this is all about because parents and coaches get vicariously caught up in the athlete’s accomplishments.

GAZETTE: What happens to the body when stress and anxiety overwhelm us?

HOLLANDER: Your cortisol levels go up and your entire body is now hypervigilant to the point where you’re actually making mistakes because you’re hyper-focused on things. Your body is saying “There’s danger.” In a way you can think of that as you now have two tasks. One is managing the danger that’s in your mind, and the other is doing your triple twist off the floor mat. And trying to do two things at once rarely, rarely works. Your focus is gone, and you stumble.

GAZETTE: What lessons can we take from the example set by Biles, Osaka, and the other athletes who are putting their mental health and safety above winning?

HOLLANDER:: There will be people who will say, “Me, too — this is not wrecking my mental health and I don’t want to live with this.” In the best of all possible worlds the coaches and parents will take this more seriously and build into the training regimens ways for athletes to recognize when their anxiety is getting to the point where it’s more than they can manage.

GAZETTE: Can you spell out some of the warning signs?

HOLLANDER: Is your sleep way off? Are you having trouble concentrating because you’re totally preoccupied, because this has become all-encompassing? Is your appetite disappearing in some way? Are you more irritable than you usually are before a competition? There are signs out there. My sense is that there are people examining and researching ways we can predict this and what can we do to avoid these really gifted athletes having these kinds of difficulties.

Interview was edited for clarity and length.