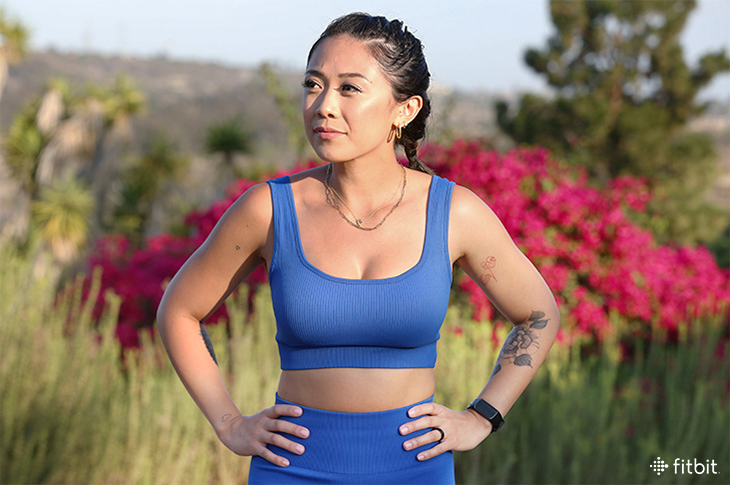 As a child, Kathleen Porteria would never have imagined that she would one day become a fitness content creator with a passion for weightlifting. Growing up in Los Angeles, she struggled with severe and chronic asthma that made physical activities a challenge. She was always the last to finish a race. Sports and athletics seemed like they were for other “athletic” kids.

Kathleen can still clearly remember experiencing feelings of terror when her asthma struck and she couldn’t get enough air into her lungs or oxygen into her bloodstream. The attacks would sometimes come on at random. It only took a change in the weather or inhaling a bit of dust or pollen, and the airways in her lungs would start to swell and constrict.

“It felt like trying to breathe through a tiny straw,” she remembers about going into anaphylactic shock. “Once or twice a year, my parents would have to rush me to the hospital, where I would stay in the ICU for days until I could return to normal breathing and my oxygen levels stabilized.”

When Kathleen moved to the Philippines to attend college, she was determined to do everything possible to become healthy and strong. She wanted to prove that her asthma did not define her or limit what she could achieve. After joining a gym, she discovered that lifting weights improved her physical and mental health.

As she grew stronger, she began to feel she had more control over her asthma. After obtaining a Bachelor’s in psychology, she decided to pursue a career in health and fitness and eventually received a certification as a functional strength coach. She also continued strength training. In 2019, she signed up for her first-ever powerlifting event. Weighing in at 120 pounds, she deadlifted nearly twice her weight.

As she overcame the childhood trauma associated with her asthma, she felt her story was worth sharing on social media. She now has tens of thousands of followers she hopes to inspire to overcome similar obstacles and become their strongest and happiest selves.

Kathleen shares her interest in health and fitness with her husband, a professional soccer player. While she was pregnant last year, he gave her a Fitbit Charge 5.

“Obviously, pregnancy is a time when you want to listen closely to your body,” she says. “I wanted to get enough exercise but didn’t want to over-exert my body. The data on my heart rate and Active Zone Minutes helped keep everything in balance. My Daily Readiness Score helped me know when to go to the gym and when it was time to rest and rejuvenate. I knew staying healthy and fit would help me during the delivery.”

Kathleen proudly shared the changes in her body in videos and pictures throughout her pregnancy. Like her asthma, pregnancy was both a physical and mental challenge. And that challenge didn’t end after her son’s healthy birth.

“I’ve struggled with anxiety throughout my life, and some of those feelings came back after my son’s birth,” she says. “I feel it is important to be honest about mental health.”

Kathleen is now sharing the story of her postpartum fitness journey on her social media accounts. Her sleep scores are going up now that her 10-month-old son is sleeping through the night. She’s not back to her former fitness levels, but the stats on her Fitbit app are showing steady improvement. She keeps an inhaler handy—but her asthma is under control and she rarely needs it. “I wouldn’t say I’m one hundred percent, but I’m getting there,” she says. “The muscle memory I built before I got pregnant is kicking in. It is amazing what the human body can achieve.”

Kathleen sometimes thinks about the kid she used to be who always came in last and was afraid to push herself physically. “I’m proud of the challenges I’ve faced,” she says. “They have shaped me into who I am. It doesn’t matter to me if I finish last, as long as I finish strong.”

The post Discover How This Fitness Content Creator Overcame Her Anxiety While on a Journey to Better Health appeared first on Fitbit Blog.