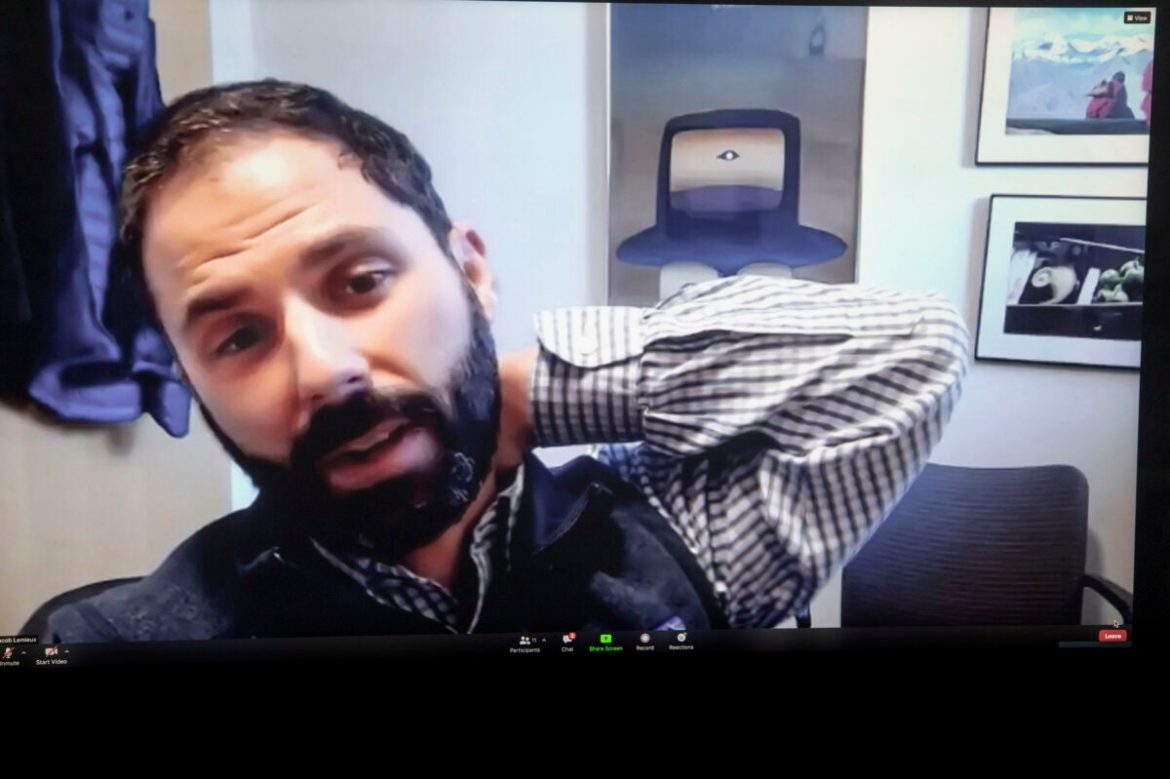 Based on the quick rise and precipitous drop of Omicron in South Africa, Harvard experts are cautiously hopeful about a possible decline of the surging COVID variant in the very near future, even as they warn of dramatic case spikes, overloaded hospitals, and slowly rising deaths in the interim.

“In South Africa, the Omicron wave lasted on the order of weeks. I would imagine that this will be something that lasts similarly long, perhaps a bit longer in the U.S.,” said Jake Lemieux, an infectious diseases specialist at Massachusetts General Hospital, instructor in medicine at Harvard Medical School, and co-lead of the viral variants program at Massachusetts Consortium on Pathogen Readiness. “There’s a seasonal component to it — there was last season — so I think it’s going to be a difficult winter, and the maximal period seems like it’s about to unfold over the next few weeks.”

Lemieux and other coronavirus experts at MassCPR emphasized during a media call on Tuesday that important key questions remain unanswered and that the experience in South Africa — whose population is much younger than that of the U.S. — may not be mirrored here. Omicron peaked there weeks ago, followed by a rapid drop in cases, and the country has also seen proportionally lower levels of both hospitalizations and deaths.

Barouch also said that there is initial evidence in animal studies that the fast-spreading variant does indeed cause less severe disease, with infection concentrated in the upper airways and to a lesser extent in the lungs, where it can cause life-threatening pneumonia. “There is some emerging data in animal models … that infection of those animal models appears to result in robust upper-airway disease but less robust lower-airway disease and less severe pneumonias. That is certainly consistent with what we’re seeing clinically.”

“We are, it is probably fair to say, engulfed in an Omicron wave right now, and the question is: How high does this wave go, and how severe is its impact going to be on patients, the health care system, and society? We’re going to find out.”
— Jake Lemieux, infectious diseases specialist at Massachusetts General Hospital

Reports from the U.K., whose population more closely resembles the U.S. in age, indicate that cases have begun falling in London, though experts there questioned whether they might still plateau and warned that most of the decline has come in younger age groups.

The U.S. has seen no sign of an Omicron peak, however. Statistics from the Centers from Disease Control and Prevention show the seven-day moving average of new cases topping 491,000 on Jan. 3, nearly double last January’s pandemic peak of about 250,000. New daily hospital admissions, which typically trail cases by a few weeks, have risen as well, though, at 4.45 per 100,000 and have not yet topped last January’s Alpha variant-driven peak of 4.92.

Deaths, which trail hospitalizations, have surged since late November, but the seven-day average of 1,165 on Jan. 3 has not yet reached the levels seen during prior waves, including 2,299 during April 2020, when the original virus circulated, 3,421 in last January’s surge after Alpha had arrived on the scene, and 1,923 during this past September’s Delta wave.

Experts with the Massachusetts Consortium on Pathogen Readiness are cautiously hopeful about a possible decline in the surging Omicron variant in the near future. Clockwise from top left, Jeremy Luban, Bruce Walker, Jake Lemieux, Dan Barouch, and Katherine Luzuriaga.

Another result of Omicron’s rapid emergence in the U.S. has been rising numbers of children with COVID infections — 325,000 during the week ending Dec. 30 — though Katherine Luzuriaga, a pediatrician and vice provost for clinical and translational research at the University of Massachusetts Medical School, said they’re not seeing a significant increase in the rates of hospitalization or death due to the ailment.

“We’ve seen a huge surge in the number of children-reported cases of COVID infection,” Luzuriaga said, adding that some of those positives have come in youngsters admitted to hospitals for other conditions but tested for COVID. “Fortunately, to date we have not seen an increase in the rate of hospitalization due to COVID or in severity of disease due to COVID, and most of the severe cases that we are seeing in hospitals have primarily been in unvaccinated or under-vaccinated individuals.”

Despite those encouraging signs, the outlook for the immediate future remains perilous, with hospitals already operating at capacity and a recent survey of viral particles in Boston-area wastewater showing a massive spike in virus that so outstrips any point of the pandemic that Jeremy Luban, co-lead of MassCPR’s viral variants program, called it “absolutely terrifying.”

“We are, it is probably fair to say, engulfed in an Omicron wave right now, and the question is: How high does this wave go, and how severe is its impact going to be on patients, the health care system, and society?” said Lemieux. “We’re going to find out.”

Experts also pointed out that the U.S.’ size means it is likely that Omicron will play out — as did waves of other variants — at different times and in different manners in different parts of the country.

“The bottom line is that Omicron is going to visit every city and every town in the country and make its presence known,” said Luban, who is also a professor of molecular medicine, biochemistry, and molecular pharmacology at UMass Medical School. “I don’t think there’s any question about that.”

Though difficult weeks lie ahead, Barouch said that successive waves of infection and vaccination are shifting the landscape onto which new variants emerge to one where many potential hosts have some form of pre-existing immunity and some, having been vaccinated and infected, have several.

“I don’t think it’s a foregone conclusion that the next variant will necessarily be less pathogenic. That remains to be seen,” Barouch said about the odds of a new, less transmittable version. “But I do think that with each month that goes by, each variant that comes and goes, and each vaccine campaign, that we’re seeing a larger fraction of the U.S. population and also the global population with some level of immunity.”